Largehearted Boy: A. Natasha Joukovsky's Playlist for Her Novel "The Portrait of a Mirror"

A. Natasha Joukovsky's Playlist for Her Novel "The Portrait of a Mirror" 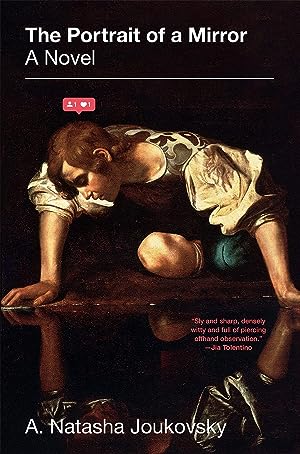 A. Natasha Joukovsky's novel The Portrait of a Mirror is a dazzling modern take on the Narcissus myth.

"A richly-layered portrait of two couples caught a crossroads....Joukovsky’s prose, like the best parts of Jonathan Franzen’s Freedom or Donna Tartt’s The Secret History, demands the reader’s fullest attention. Clever and witty and intricate, Joukovsky’s voice emphasizes her characters’ best features, like candlelight in a luxurious hotel bar."

In her words, here is A. Natasha Joukovsky's Book Notes music playlist for her novel The Portrait of a Mirror:

The Portrait of a Mirror is a modern reinterpretation of the Ovidian myth of Narcissus, following two couples—Wes and Diana of New York, and Dale and Vivien of Philadelphia—as their lives cross and tangle in the summer of 2015. I prefer the word soundtrack to playlist when talking about its music, as the novel’s fidelity to the vivid movie playing on loop in my mind became a litmus test for me while writing, a smooth counterweight to its many disparate allusions. Music is woven into the fabric of the narrative as inextricably as the visual artwork of Caravaggio and Poussin and Bernini, lyrics embedded alongside lines of Tolstoy and Melville and Wilde and James. Select songs not named explicitly in the text itself are included in an appendix to the novel (“Appendix B: Soundtrack Supplement”). These are the songs I’ve chosen to feature here (in bold), contextualized within a broader “extended cut” list (in italics), synchronized chapter by chapter in accompaniment to my imagined film.

Sympathy for the Devil - The Rolling Stones

Man-of-wealth-and-taste C. Wesley Range IV is introduced in the novel’s first chapter as “the kind of devil with whom you’d sympathize.” I envision the subtle intensity of the Bruch giving way to this Sympathy as Wes stumbles out of bed and heads uptown.

Caught by the River - Doves

The lyrics here read like Ovid’s warning to Narcissus at the height of his lust—at the very moment Caravaggio captured. I imagine the thrumming introduction following Wes up the steps of The Metropolitan Museum of Art, with his—and our—first glimpse of the painting timed to Jez Williams’s vocal entry: Son / What have you done? / You’re caught by the river / You’re coming undone.

I Heard It Through The Grapevine - Marvin Gaye

This is the official theme song of the Sill School gossip network (“Sill Mill”), and hits just the right note of second-hand longing in Chapter VI, overlaying Wes and Vivien’s historical acquaintance.

Diana is described in the novel as both “ludicrously young” and “like a person who knew how to put out a fire precisely because she was a practiced arsonist”—I can hear this blaring, anthem-like, in Dale’s head through her methodical dealings with Horace the Pomeranian. The sound editing team would cut it with dramatic pauses and restarts in syncopated oscillation with the dialogue.

I went to boarding school with Lana Del Rey (then Lizzy Grant; she was a year ahead of me), and had “Video Games” nostalgia explicitly top-of-mind for Wes and Vivien’s evening Singin’ in the old bars / Swingin’ with the old stars at the end of Part One. “How enticing, even in the happiest of times: to experience the smooth, varnished version of yourself, to control it like a video game, watching your simulacrum perform with such uncanny fidelity you can almost believe it’s the real you.”

We Used to Wait - Arcade Fire

A song with a sort of protean lyric ambiguity that shape-shifts to accommodate each of the four main characters' circumstances in the early chapters of Part Two. We Used to Wait—as in we no longer do? Or as in we still are, but more impatiently? (Sometimes it never came, Arcade Fire admits.)

I envision Wes’s uncle Cort playing this at Wes’s grandparents' house in Nantucket; several of its lyrics are embedded into the scene following Wes and Diana’s arrival there. A ship launches from Wes’s chest; the salty wet air clings to the inside of his lungs; Diana’s thumb presses into his skin.

I’ll Be Your Mirror - The Velvet Underground

Bits of The Velvet Underground & Nico album more broadly are sprinkled through Wes and Diana’s Nantucket weekend, but none fits the novel quite so exquisitely as “I’ll Be Your Mirror.” When you think the night has seen your mind / That inside you’re twisted and unkind / Let me stand to show that you are blind / Please put down your hands / ‘Cause I see you.

Tryouts - Jerry Goldsmith [from the soundtrack to Rudy]

Push It to the Limit - Brian “Hacksaw” Williams, Dominik Hauser [from the soundtrack to Scarface]

Hungry Eyes - Eric Carmen [from the soundtrack to Dirty Dancing]

The song I imagine overlaying Diana’s “montage of montages” in Chapter XV—her time in Philadelphia having an almost suburban feel in comparison to New York. Lyrically, it has everything—corporate malaise (just punch the clock), social insularity (I wonder if the world’s so small), a mirror simile (like a mirror, the city lights shine), and a persistent yearning (I need the darkness, someone please cut the lights).

Want to Want Me - Jason Derulo

The “especially pretty French song” I picture Dale and Diana dancing to in the Paris speakeasy. The early-aughts long shot music video of Rafaël playing guitar for his love interest on a snowy rooftop is absolutely the vibe—except summer-ized, and in a basement.

I Can Only Imagine - David Guetta feat. Chris Brown and Lil Wayne

I can only imagine this song playing in the full-capacity SUV Diana and Dale take with their colleagues to the Met in Part Three—the spark inspiring “several polite calls to turn up the air-conditioning.”

Wes definitely walks into the party at the Met like he was walking onto a yacht—and with one eye in the mirror, “squinting absently at his growing reflection in the glass of the revolving door.” That he—and Diana, and Dale, and Vivien—all think this song is about them is basically the crux of the novel.

Another too-ideal Met party melody, and specifically for Dale and Diana. It’s the one I imagine playing in the background when they’re in the Medusa corridor with “the party roaring toward its apex in the Great Hall.”

Left of the Middle was the first CD I ever bought, and I stand by it—“Torn” not only holds up aesthetically, but I can imagine both Vivien and Diana belting it out internally at the novel’s climax.

It Wasn’t Me - Shaggy

The end of Part Three includes an extended allusion to Anna Karenina’s suicide, and “Locomotion” fits the bill for the train motif with just the right cheeky tone for “an incendiary story…about a Pomeranian at the Metropolitan Museum of Art.”

Lost in My Mind - The Head and the Heart

There is a total “denouement” quality to this song, a sense of resolution to it while holding onto some kernel of persistent longing. Like The Portrait of a Mirror, its upbeat melody is at odds with its lyrical malaise; no one ever says Don’t you worry / Don’t you worry, don’t worry about me unless there’s something to worry about.

Love Theme - John Williams [from the soundtrack to Cinema Paradiso]

Orchard House - Thomas Newman [from the soundtrack to Little Women (1994)]

The Sound of Silence - Simon & Garfunkel

I wrote the last two chapters of the novel with The Graduate top of mind, and while in most ways the allusions are inverted, the presence of this song is a true echo. “Dale’s words echoed in the wells of silence,” the narrator states in the novel’s antepenultimate paragraph.

An anachronistic track—everything before this is from 2015 or earlier—but too apt not to indulge in for the credits: You will be that chosen master / You will leave with the girl this time / You will be the leading actor / Movie of your own design.

*Sort of akin to Prokofiev’s Peter and the Wolf, where each character is represented by a different instrument, I imagine the four German violin concertos discussed in Chapter XX each tied to a specific main character: the Bruch for Wes, the Beethoven for Dale, the Mendelssohn for Diana, and the Brahms for Vivien.

**I deliberately did not specify the song Diana chooses on the jukebox in Chapter XV, hoping the reader’s imagination would supply a personalized selection, but “Call You Girlfriend” is what I myself hear most often there.

For more about The Portrait of a Mirror’s allusions, musical and otherwise, visit @imetovidsheirs on Instagram.

A. Natasha Joukovsky spent five years in the art world, working at the Philadelphia Museum of Art and the Metropolitan Museum of Art before pivoting into management consulting. The Portrait of a Mirror is her debut novel. She lives in Washington, D.C.